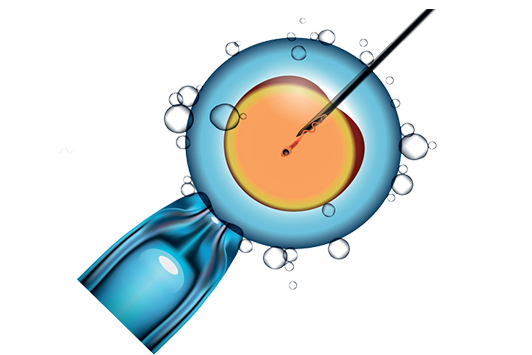 Naturally, the fertilisation process involves the penetration of a single sperm from the ejaculate into the egg (called oocyte in scientific terms) released during the menstrual cycle. Said sperm must penetrate the shell of the oocyte (called zona pellucida) to immediately fuse with the female gamete.

Sometimes, either due to physiological deficiencies that may lead to a drastic reduction or absence in the production of gametes or due to poor gamete quality or defects in the interaction, the process of fertilisation can be diminished or even prevented. From the Assisted Reproduction Techniques (ART) perspective there are two main approaches to overcome these deficiencies:

What is Intracytoplasmic Sperm Injection (ICSI)?

How Does ICSI Work?

In traditional IVF, around 50,000 or even more swimming sperm are put next to the egg in the laboratory. Fertilization takes place when the sperm reaches the internal cytoplasm of the egg. On the other hand, in the ICSI procedure, a tiny needle called micropipette is used to inject one sperm inside the centre of the egg. After using the traditional IVF or ICSI, the fertilized egg develops in a laboratory for 1 to 5 days before transferring it into the woman’s uterus.

Who is this for?

The indications of conventional IVF and ICSI are a tubal factor, uterine factor, premature ovarian failure, ovulatory dysfunction, endometriosis, diminished ovarian reserve and unexplained infertility. ICSI is especially recommended for samples presenting alterations in the semen analysis (mostly in cases of low concentration or motility), situations in which there are a limited number of oocytes available or in cases of previous fertilisation failures with conventional IVF. This leads conventional IVF to be usually indicated in good prognosis patients were the quality of both gametes is not an apparent limitation.

ICSI is based on the insertion of a selected sperm into the oocyte, overcoming the limitations that conventional IVF faces with poor semen samples and deficiencies in the interaction between the gametes. Because of this, ICSI has become the most commonly used IVF technique. With the
help of an advanced micromanipulation station (including microscope, microinjectors and micropipettes) the sperm has to be individually selected and immobilised. During the microinjection, the oocyte has to be held while the sperm is inserted and released inside the inner part of the oocyte. The day after the microinjection, signs of proper fertilisation will be checked in each oocyte.
ICSI could be recommended if there is suspicion of a certain reason making the fertilization difficult. ICSI is used for couples who have male infertility factors. These factors could include any of the following: low sperm, poor movement, poor quality, the inability of penetrating an egg or azoospermia.
ICSI has been a tremendous benefit to IVF for over a decade and has revolutionized the treatment for couples that have diagnosed with low sperm count, low sperm motility or low sperm morphology. At Aaradhya, we discuss with the couples and then go ahead with the procedure.